Match play is one of the most common scoring formats for single or multi-group golf outings.

Match play format is a great format for both tournament and casual play. In a typical match play format, each team is composed of either one or two players.

There are three popular versions of match play, but all have the same general rules and terminology.

In simple terms, match play scores the number of holes won instead of counting cumulative strokes.

The goal of any match competition is to win more holes than the opponent you are playing against. Once again, strokes are only counted on each individual hole and are not cumulative.

The same general rules in place for stroke play are also in effect for match play.

For example, if you slice a tee shot into a pond, you would still be hitting your third shot after your drop.

The rules differ slightly from stroke play on the green. If you have a short putt (within a foot or so) your opponent may concede the putt or a “give it to you.” These putts are also called “gimmes.”

“Giving a putt” is always the opponent’s discretion, and the player putting may never call his/her own put a “gimme.”

Likewise, players who have no chance to win a hole may pick up their ball as there is no need to finish out once a hole is lost.

For example, if your opponent has already made his/her putt for birdie and you are putting for par, your par doesn’t matter now because you have already lost the hole.

Never concede holes that your opponents have long putts coming on.

Rounds of match play are often shorter than rounds of stroke play because you often play less than 18 holes. If you are all-square (tied) after 18 holes, you must continue to play holes until the tie is broken.

Match play tournaments often have a designated playoff hole if the match goes over 18 holes. Most of the time the playoff hole is the 18th hole.

If you are just playing with your buddies, make sure to inform the clubhouse that you are playing match play and tied after 18 holes. Most courses will let you keep playing as long as the course isn’t overly crowded. 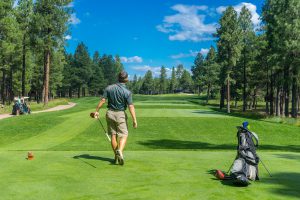 To understand scoring better, let’s walk through a scenario.

When you and I start our match, we’re all-square. Let’s say that I shoot a seven on the first hole and you shoot a four. You go up 1 and I’m down 1.

If on hole two, you shoot a three and I shoot a five, you go up 2. Once again, the number of strokes you win the hole by is irrelevant, all that matters is you won the hole.

Now, let’s say that after that we tie on holes 3 and 4. Unlike skins, these holes do not roll over. They are a “wash” and the points are lost.

To finish a match, play is stopped when it is impossible for a competitor to even the score over the course of the remaining holes.

In simpler terms, a match is over when a competitor would still trail even if they won out over the remaining holes. 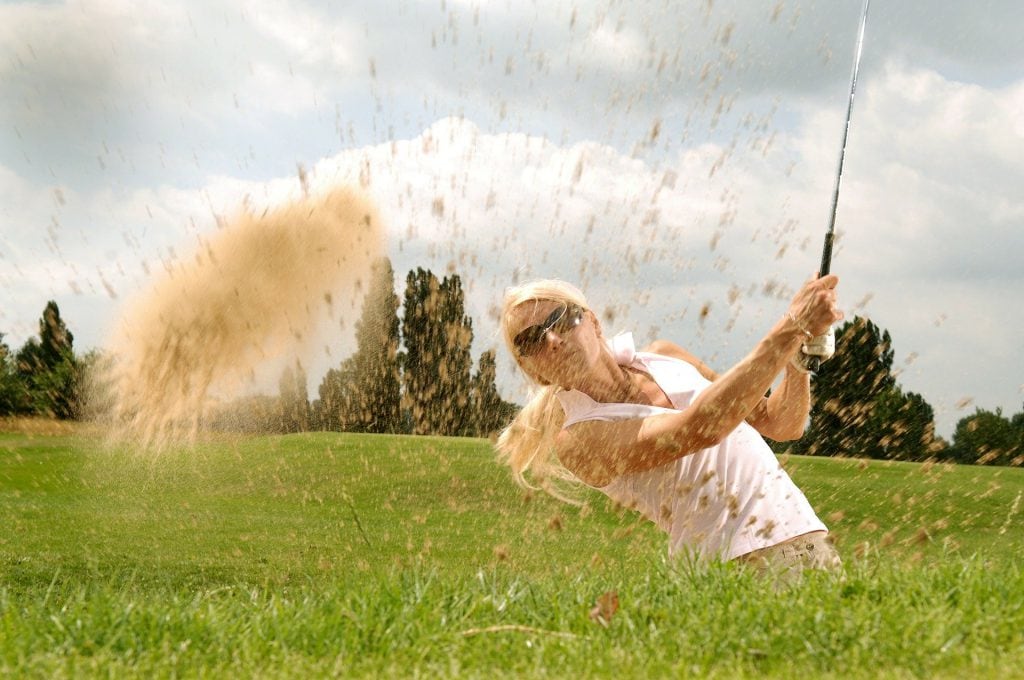 Looking at scores it is easy to tell who won the match and by how much. Bigger numbers mean that the match was more one-sided.

There are three basic types of match play: singles, fourballs, and foursomes. All three of these types use the rules above, but two of them have additional rules.

Singles is just like it sounds: a match between you and your opponent – no teams. Professional tournaments like the WGC-Match Play on the PGA Tour are singles tournaments.

Fourballs is a type of match play with two teams of two people.

Still using the above rules, all four players play their own ball. The lowest score of the two people on each team is the score counted for the match.

For example: If you and I are on a team and I shoot a four and you shoot a three, we play your score of 4, for the hole. If our opponents both score fours, a four would be used for their score and we would win the hole because your 3 is better than their 4.

That process continues throughout the match. Essentially, our combined lowest score creates one player’s (our team) score.

You and your partner will need to decide who tees off on the first tee. After that, shots rotate every turn.

There are certain strategies that may help you have success in match play, however, the most effective strategies are in doubles matches.

Aggressive play can both hurt and help a player in a match play game. It is important to know when to be aggressive and when to play safe.

You are much more likely to make errors when taking aggressive shots, so you should try to keep these shots to a minimum unless you are down or up by a fair margin.

At times, a safe shot may even put added pressure on an opponent. A safe shot can be a very effective offensive tool when a player is first to hit.

In doubles play, you may want to take more aggressive shots if your partner has already taken a safe shot and is in a good position.

Typically, in doubles play, the first player on a team should always make the safe shot which will take pressure off their teammate and allow them to “go for it.”

Other than the first tee box, strategy when rotating shots is very similar to strategy you would use if playing one on one.

Once again, know when to play it safe and when to bring out the “big dog.”

Match play is a great alternative to stroke play. It can be a great format when playing with friends or one that you can play in a tournament.

No matter who you’re playing, keep track of how your opponent is playing each hole and adjust accordingly.

Match play is much more about playing your opponent than traditional stroke play. Some players excel under the added pressure while others fail.

Which will you do?